Home Science Dinosaur eggs were soft like a turtle’s, A New Study Reveals 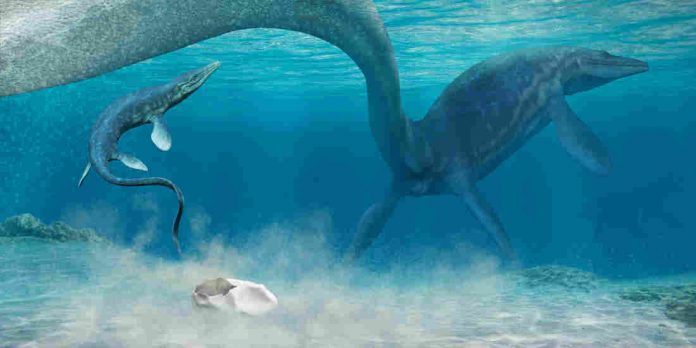 In 2018, paleontologist Julia Clarke was visiting a colleague named David Rubilar-Rogers at Chile’s National Museum of Natural History. He showed her a mysterious fossil that he’d collected years earlier in Antarctica. He and his co-workers called it “The Thing.”

“It was weird enough that they decided to collect it, even though it wasn’t clear what it was. It definitely wasn’t bone, but it was strikingly unusual,” recalls Clarke, who works at the University of Texas at Austin.

The object was more than 11 by 7 inches in size and looked like a deflated football. Clarke immediately realized that The Thing was a giant egg — a soft-shelled egg. And it was from 66 million years ago, around the time when an asteroid hit Earth and led to dinosaur extinction.

Many turtles, snakes and lizards lay eggs with soft, flexible shells. The Thing is the largest soft-shelled egg ever, by a long shot, says Clarke.

This fossilized egg is also one of the biggest animal eggs ever discovered, second only to the egg of the extinct elephant bird from Madagascar.

In the journal Nature, Clarke and Rubilar-Rogers, along with a team of researchers, have announced that this egg was probably laid by a giant marine reptile, such as a mosasaur.

“The shell is very thin. It can rip almost immediately upon exiting the mother, and the juvenile emerges from that egg,” says Clarke, explaining that in this case, sediment fell into the egg and filled it up after it was opened.

Other researchers interested in egg evolution say this is an astounding find.

“A soft-shelled fossil egg like this is a rare gem,” says Mary Caswell Stoddard, an evolutionary biologist at Princeton University who was not part of the research team. “The lack of soft-shelled fossil eggs, which are extraordinarily rare, makes it challenging to flesh out a detailed picture of egg evolution in vertebrates. This discovery helps provide one critical piece of the puzzle.”

Jasmina Wiemann, a molecular paleobiologist at Yale University, says that when she and her colleagues heard about this preserved mosasaur egg, “we just thought, ‘Oh, this is fantastic!’ ”

That’s because they’d just made their own ancient soft-shell egg discoveries. “It is always the best sort of confirmation that you can get as a scientist, if an independent laboratory comes up with a similar finding,” says Wiemann.

In the same issue of Nature, Wiemann and her co-workers describe eggs from two very different non-avian dinosaurs: Protoceratops, a small plant-eater, and Mussaurus, a long-necked herbivore.

Their geochemical analysis of the fossils’ makeups revealed that the young dinosaurs had been surrounded by shells that were leathery and soft, like a turtle’s eggs.

This is the first convincing evidence that dinosaurs had soft eggshells, says Wiemann.

All this evidence is dramatically changing the fossilized-egg world. Previously, researchers thought that dinosaurs had hard, heavily calcified eggshells, in part because that’s what modern crocodilians and birds have. What’s more, previously discovered dinosaur eggs were hard-shelled.

But those dinosaur eggs mostly represented three groups — theropod dinosaurs (which include tyrannosaurs and velociraptors), advanced hadrosaurs and advanced sauropods — notes Mark Norell of the American Museum of Natural History, the lead author of this study.

Other common dinosaurs didn’t seem to have left preserved eggs at all. “It was just kind of assumed that, well, you know, the fossil record isn’t that great. And we just haven’t found them yet,” says Norell.

But he wondered if these eggs were missing because they had soft shells that were less likely to leave obvious signs in the fossil record. That’s what made him curious about a subtle “halo” seen around the fossilized embryos in this study.

He predicts that now that people know what to look for, they’ll find more soft-shelled dinosaur eggs.

“What we’re finding,” says Norell, “is that soft-tissue preservation occurs more and more and more frequently than any of us ever dreamed.”

He and his colleagues say that the first dinosaurs likely laid soft-shelled eggs and that hard-shelled eggs have evolved independently three different times in the dinosaur family tree.

“The dinosaur calcified egg is something that is not ancestral, that is not sort of a primitive feature of all dinosaurs,” says Wiemann.

Hard shells could have been an adaptation that let dinosaurs lay eggs on the bare ground rather than having to bury the eggs to protect them from losing too much water through their permeable shells.

Staff - October 29, 2017 0
Scientists from the University of Bristol studying ancient fossils of a small feathered dinosaur have discovered that it had a bandit’s mask as well...
World Headlines

Confronted for picking up trash, officer had his handgun out

Staff - December 30, 2017 0
The Solar Eclipse that occurred in August 2017, revealed a newly discovered phenomena in the Earth’s atmosphere. The phenomena is called “Bow Waves” and...
Science

Second Earth found: The stuff that planets are made of

Staff - October 12, 2018 3
Is there a second Earth out there in space? Our knowledge of planetary systems far, far away is increasing constantly, as new technologies continue...
World Headlines

Staff - December 27, 2017 0
Melania Trump wished fans a Merry Christmas with a Santa-themed selfie that flatlined on social media. In the photo, the First Lady can be seen...