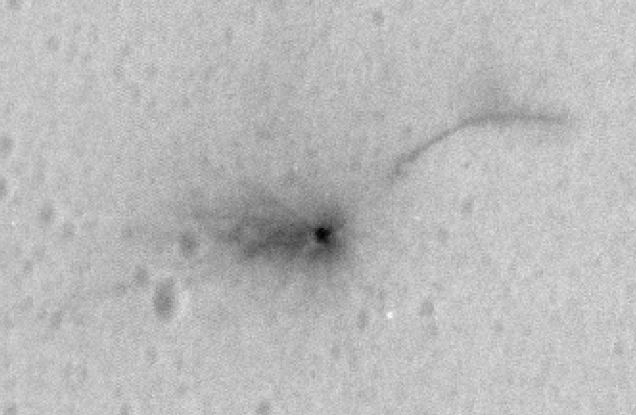 Schiaparelli Mars Lander Done In By A Computer Glitch? NASA’s Mars Reconaissance Orbiter (MRO) has acquired new high-resolution images of the crashed Schiaparelli lander, following its ill-fated attempt to reach the surface of Mars in one piece. The images confirm that the lander had a very hard fall, and raise new questions about the exact nature of the crash.

The European Space Agency (ESA) lost communication with Schiaparelli shortly before the probe was supposed to touch down on October 19.

Two days later, pictures taken by NASA’s Mars Reconnaissance Orbiter showed a black spot at the landing site, indicating that the probe crashed at considerable speed — greater than 300 kilometres per hour — and may have exploded.

But new images have offered a more detailed look at the Schiaparelli components.

The ESA said it appeared Schiaparelli had dug a crater some 50 centimetres deep and about 2.4 metres across, visible in the images as the fuzzy, blackened impact site.

It is still analysing asymmetrical dark markings around the landing site, which it said may mean the craft’s propellant tanks exploded largely in one direction.

There are also a number of white spots visible around the landing site, which the ESA said may or may not be related to the impact.

One of the larger white spots — about 1.4 kilometres south of the impact site — is likely associated with the parachute and back shield released from Schiaparelli prior to its final phase, the ESA said.

And a third feature — about 1.4 kilometres east of the impact site — is suspected to be the front heat shield.

Staff - March 13, 2018 0
Navy pilots encounter UFO? A video was released Friday by To the Stars Academy of Arts and Science that appears to show U.S. Navy...
World Headlines

Staff - May 22, 2020 0
Nicola Sturgeon has urged US president Donald Trump to "be more responsible" in his public messaging over coronavirus. The Scottish first minister's comments came after...
World Headlines

Staff - April 24, 2020 0
Reckitt Benckiser, the company that makes Lysol, said none of its products should be injected or ingested as a potential treatment for the coronavirus....
World Headlines