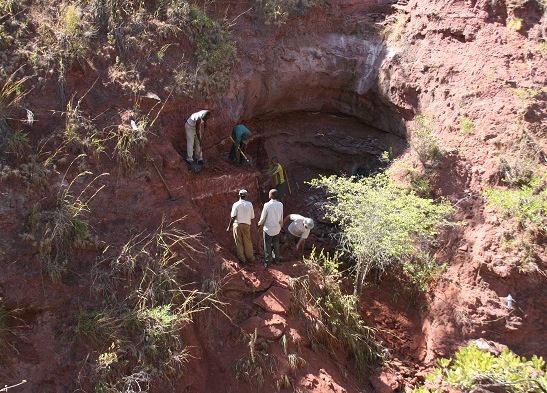 Scientists have discovered a new species of dinosaur that lived about 100 million years ago and may have weighed as much as several elephants.

The new species, named Rukwatitan bisepultus, was first spotted by scientists embedded in a cliff wall in the Rukwa Rift Basin of southwestern Tanzania. Using the help of professional excavators and coal miners, the team unearthed vertebrae, ribs, limbs and pelvic bones over the course of two field seasons.

CT scans of the fossils, combined with detailed comparisons with other sauropods, revealed unique features that suggested an animal that was different from previous finds—including those from elsewhere in Africa, according to a study the team published today in the Journal of Vertebrate Paleontology.

“Using both traditional and new computational approaches, we were able to place the new species within the family tree of sauropod dinosaurs and determine both its uniqueness as a species and to delineate others species with which it is most closely related,” said lead author Eric Gorscak, a doctoral student in biological sciences at Ohio University.

Rukwatitan bisepultus lived approximately 100 million years ago during the middle of the Cretaceous Period. Titanosaurian sauropods, the group that includes Rukwatitan, were herbivorous dinosaurs known for their iconic large body sizes, long necks and wide stance. Although not among the largest of titanosaurians, Rukwatitan is estimated to have a forelimb reaching 2 meters and may have weighed as much as several elephants.

The dinosaur’s bones exhibit similarities with another titanosaurian, Malawisaurus dixeyi, previously recovered in Malawi. But the two southern African dinosaurs are distinctly different from one another, and, most notably, from titanosaurians known from northern Africa, said co-author Patrick O’Connor, a professor of anatomy in the Ohio University Heritage College of Osteopathic Medicine.

The fossils of middle Cretaceous crocodile relatives from the Rukwa Rift Basin also exhibit distinctive features when compared to forms from elsewhere on the continent.

“There may have been certain environmental features, such as deserts, large waterways and/or mountain ranges, that would have limited the movement of animals and promoted the evolution of regionally distinct faunas,” O’Connor said. “Only additional data on the faunas and paleo environments from around the continent will let us further test such hypotheses.”

In addition to providing new data about species evolution in sub-Saharan Africa, the study also contributes to fleshing out the global portrait of titanosaurians, which lived in habitats across the globe through the end of the Cretaceous Period. Their rise in diversity came in the wake of the decline of another group of sauropods, the diplodocoids, which include the dinosaur Apatosaurus, the researchers noted. Scientists have found fossils for more than 30 titanosaurians in South America compared to just four in Africa.

“Much of what we know regarding titanosaurian evolutionary history stems from numerous discoveries in South America—a continent that underwent a steady separation from Africa during the first half of the Cretaceous Period,” Gorscak said. “With the discovery of Rukwatitan and study of the material in nearby Malawi, we are beginning to fill a significant gap from a large part of the world.”

Cold snap to return to UK this weekend, Report

Staff - March 13, 2018 0
Cold snap continues, will the snow return? BBC WEATHER has warned of more snow in Britain this weekend as the Beast from the East...
Health

Rite-Aid Covid Vaccine: How to sign up for a COVID-19 vaccine...

Staff - February 20, 2018 0
JESY Nelson has been accused of appropriating black culture by angry Little Mix fans after wearing her hair in dreadlocks. The singer, 26, posted a...
World Headlines

Staff - May 13, 2020 0
Los Angeles County residents will likely find themselves under some type of stay-at-home restrictions for another three months, barring a major change in the...