Home Technology This Is The iPhone 6 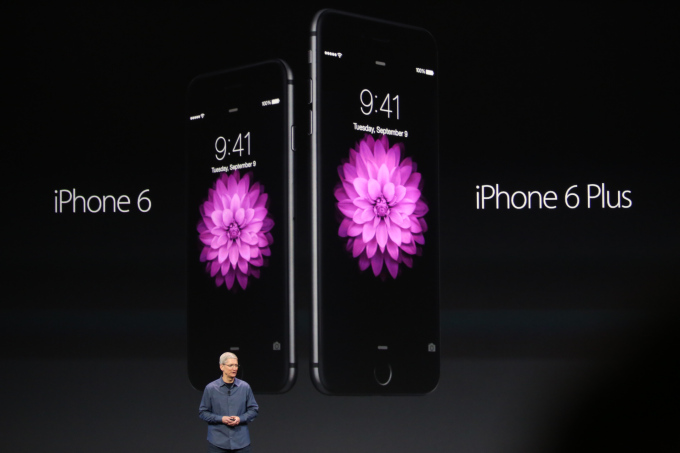 As expected, Apple has unveiled a larger iPhone, and it’s called the iPhone 6 Plus. It also happens to be the biggest iPhone to date.

The iPhone 6 Plus measures 5.5 inches, just as was rumored. Its display has a resolution of 1920×1080 with 401ppi. The iPhone 6 Plus also managed to pack two million pixels in its display, over a million more than the iPhone 6. With a larger screen comes new landscape view, which basically means a horizontal orientation so users can see what’s on their screen in a sideways stroke.

While the iPhone 6 Plus is larger than any iPhone before, it’s also razor thing, measuring only 7.1mm thick.

More iPhone 6 Plus specs and features

And what’s making this new larger iPhone tick? Apple’s latest A8 processor, a 64-bit chip tallying two billion transistors. The iPhoen 6 Plus’ GPU can perform up to 50 times faster than previous generations, while the CPU is up to 25% speedier, Apple claimed.

Apple’s M motion coproccesor also got an update, and it’s now called the M8. The sensor can measure a how many stairs a user has climbed, Schiller said, a nod to the iPhone 6 Plus’ health-metric measuring capabilities. The M8 constantly gathers motion data from an accelerometer, gyroscope and compass.

On the battery front, Apple has gone out of its way to make the iPhone 6 Plus’ battery better than the iPhone 5S in every way (audio, video, Wi-Fi browsing, etc.).

Jumping to its connectivity, the iPhone 6 Plus will feature VoLTE support. It supports over 200 LTE bands and will allow for Wi-Fi calling. T-Mobile and EE have both signed up to support Wi-Fi calling.

The iPhone 6 Plus rear iSight camera measures 8MP. It’s an entirely new sensor and features a new Autofocus with Focus Pixels feature. The handset’s Autofocus is two times faster than before and it has an aperture of f/2.2. While the camera specs between the iPhone 6 and iPhone 6 Plus are identical, the 6 Plus does stand out in that it has optical image stabilization. The iPhone 6 camera doesn’t.

As for recording capabilities, the iPhone 6 Plus camera can record 1080p video at 60fps and 240fps in slow motion.

Moving to the front, the iPhone 6 Plus features a new 1.2MP HDR FaceTime camera. FaceTime, by the way, now features a burst mode.

A nice little touch is moving the sleep/wake button from the top to the side, making the device a little more mandible friendly. Like the iPhone 5S before it, the iPhone 6 Plus comes stamped with Touch ID.

Along with the iPhone 6, the iPhone 6 Plus will ship with Apple’s new mobile payment system, Apple Pay.

iPhone 6 Plus price and release date

The iPhone 6 Plus release date is slated for September 19 and users can pre-order it beginning September 12. The new iPhone comes in a choice of silver, gold and space gray.

Staff - May 12, 2018 0
Alcohol and tobacco are by far the biggest threat to human welfare of all addictive drugs. Every week there seems to be a new, scary...
World Headlines

Report: What the Raiders are saying after their last-minute loss to...

Staff - November 23, 2020 0
The Raiders were 1:43 away from an improbable sweep of the Kansas City Chiefs on Sunday night. Then Patrick Mahomes and the mighty Chiefs’...
Health

Staff - May 30, 2020 0
Government employees have returned to work in Iran and President Hassan Rouhani said mosques are to resume daily prayers throughout the country, even though...
Science

Staff - May 23, 2018 0
Bone trove in Denmark tells story of 'Barbarian' battle. Archaeologists have recently stumbled across the gruesome aftermath of a violent battle between northern European tribes...